Has two valknut(symbolizes she is sworn to Odin) tattooed on her wrists and one on the back of her neck. Could be called pretty if you ever saw her not covered in forge soot and wearing something more fashionable than her doc martens and ripped up jeans. She is noticeably well muscled for a girl and spends alot of time in the gym, she can squat her own body weight with relative ease.

Growing up Cynthia was a shy reclusive child prone to illness and a waifish build that tended to make adults worry she wasn’t eating enough. Her family life was not too out of the ordinary a mother and father that worked all the time, an older sister that liked to make her life hell, and a little sister she didn’t relate to. Starting out in the midwest her family moved around alot so she did not have much time to make real friends. She chose to escape in books becoming an avid fan of sci fi, fantasy, and mythology. This last one led her to convert to asatru although in the beginning she was about as devout as your every day church going member. That all changed at the age of 23 when a near death experience brought her closer to her god, some would say almost uncomfortably close.

After that she abandoned her her brief stint as a community college student to pursue metalworking and preparing for her destiny.

Following the events in NY with the group she decided to move there, seeing Dani as likely candidate for the end times. 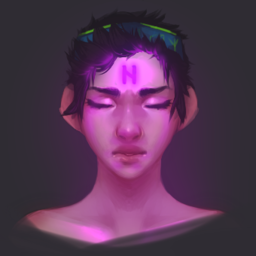