Friedrich “Freddy” Hoffmann is a first generation American citizen after his parents moved from Germany when they were younger.

Freddy is the #1 fan of Xavier Bex, famous magician/detective. He has attended many of his performances often in the front row of the audience. He currently owns a autographed photo (bought off ebay) 3 posters, and a beginning magician’s kit endorsed by Xavier. His most recent prized possession is a signed beaker witch sits on a shelf in his office/lab. Contrary to what he has told everyone, the symbol XB∞ does not stand for the old generation of Microsoft gaming console. It instead refers to “Xavier Bex Forever”.

Freddy was sitting at his desk when it started happening again. The same dull ache in his bones that would slowly build up as the rash kicked in, then the boils would appear and his joints would begin to lock up as the crippling pain begin to take hold, and finally death. Of course the death was just a reasonable outcome, and although he had felt more pain than most people ever do their entire lives, he hadn’t died, yet. It was miracle that he was still alive, a miracle of science that is.

Friedrich James Hofmann, although everyone but his mother called him Freddy, got up out of his computer chair and limped to his makeshift chemistry lab in the back of his house. Freddy had always found chemistry fascinating, ever since his first grade teacher had added soap to milk mixed with food coloring in an attempt to show polar characteristics of molecules. Even at that age, Freddy knew there was more. After majoring in chemistry at Columbia University he had started work at a small research company. He was approached his senior year by a well-dressed man who immediately hired him on the spot. When asked why the man had approached Freddy personally, the man responded that a teacher had referred him. Freddy still hadn’t found out who that teacher was, or if that were even true.

Freddy reached for the box above his lab station and pulled the nearly empty vial from its innards. He stared at the greenish-copper liquid inside, as he began to feel his spine locking up. He glanced at his father’s clock which hung in the corner of the room; it had been almost seventy-one hours since his last douse. The side effects were just beginning and this time he hadn’t done anything that would speed up the process. The most he had ever gone was one-hundred hours which was during his first week after the accident, before he knew he would always have to drink the solution. He had barely been able to move at that point and may have only lasted a little longer before it was too late. He had reached that point only one other time, and that was when he had discovered his new ability.

In one quick gulp he drained the rest of the vial, coughing as the liquid burned his throat. He sat in the recliner next to the work space and prepared for what was to come. As the clock began to wind up its bells, Freddy doubled over in his chair. He couldn’t move, couldn’t scream, couldn’t breath as the solution worked to rid his body of the toxin, although never permanently. The clock finally chimed the last bell for nine o’clock, and he let out a small moan as he was able to breathe again. As Freddy got up and began preparing breakfast before his daily workout, he couldn’t help but think. What a great way to start a day. 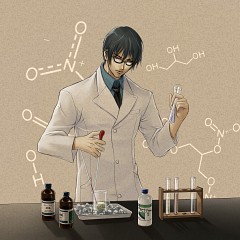