A man who drew his arms at the drop of a hat.

At first glance, one might think this guy got lost on his way to a old west movie shoot. A closer look will reveal a determination in his eyes that almost makes up for his lack of grooming and old world ethics. Usual get-up includes a duster that has clearly been patched several times and tailored to fit this one man. Same goes for the hat he seems to never be without. His demeanor is sometimes a bit gruff, but there is a sense that he is being instructed to do so, similar to how a retail worker is forced to act like a salesman or a car dealer is forced to be a bit of a weasel. There are moments when a whole different personality will begin to break free from his attitude, like a ray of sunshine erupting from the clouds on a gloomy day. However, he will appear to remember his reasons for his demeanor and will snap back to his previous attitude. 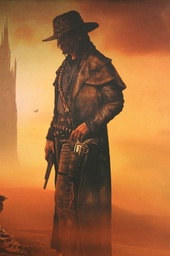