Fast talking con-man who lies more then he breathes. Mason was born to Miranda and Jacob Gallows in Newark, New Jersey. His father abandoned the family when Miranda became pregnant with his (half) sister, Rebecca Gallows. Mason was 5 years old.

Miranda supported Mason and Rebbecca working as a nurse, while Mason took on a parental roll very early for his sister, one that he struggles to let go of even to this day. Mason didn’t excel at school, but he quickly found a knack for talking himself into and out of trouble. Meanwhile, Rebbecca excelled at her studies, and dreamed of becoming a Doctor.

At the age of 17, Mason’s mother died in a car accident. After petitioning, he was declared Rebecca’s legal guardian. Mason immediately dropped out of high-school and began working as a fork lift operator for a warehouse on Port Newark. He would spend the next year there, but despite his efforts he struggled to support Rebbecca and himself and inevitably turned to alternate forms of income.

Mason’s criminal activities overtook his life very quickly. Using the extra money he got from stealing from the warehouse he worked at, as well as running the occasional credit card scam, he barely managed to make ends meet. Eventually though, his employer caught Mason in the act, and fired him on the spot.

Suddenly without a stable source of income, Mason became desperate, and began riskier activities. One day, desperate for cash, he took a job laundering money for a client he wasn’t familiar with. The deal ended up going bad, and Mason took the fall for the cash that went missing, and then settled the debt with his life.

After just being tossed off the side of a boat chained to an old engine block, Mason had little time to reflect on exactly how shitty his life had been up to that point. He knew he had tried hard, but it seemed like the deck had been stacked against him from the get go. He could count all the moments where luck hadn’t gone his way, and knew he was one of the unluckiest bastards in the world.

In a rare epiphany, he KNEW the universe owed him a favor, and that luck was exactly what you made it. He knew he would find a way out of this, and the universe would start paying him back pronto. As a complete stroke of “luck” would have it, the engine block landed on a rock with enough force to break through part of the rusty chain. Mason spent 2 long minutes on the bottom of the port struggling to get free. Memories of that moment continue to haunt Mason, and even the thought of reliving it paralyze him with fear.

After surviving his close encounter, Mason began mastering and controlling his new found powers. With sufficient stock piling of miscellaneous luck charms and trinkets, he found he could manipulate the fate of himself and those around him. As soon as he began understanding the truth behind this, he began realizing the many other ways he could re-interpret the world. He found that his knack for manipulation had manifested the ability to more directly control the minds of people. He also noticed the rare moments when he revealed the truth could contain a source of power more potent than anyone knew.

With these realization however, came new risks. His criminal activities began having repercussion in ways he didn’t realize. A scam on an auction house landed him, among other things, an antique mirror. Unbeknownst to him, the mirror had a powerful spirit attached to it, which quickly made clear it did not appreciate what had happened. After eventually settling the debt, Mason began occasionally working with other spirits, to his advantage.

As his life continues on, Mason’s only connection to his past is his Sister. Rebecca is 21 years old on a full scholarship attending medical school in New York. She knows little about Mason’s life, and knows he prefers it that way, but they still keep in touch at least once every couple days. He counts her as the one saving grace in his life, and knows the worst of his luck has made her all the more lucky. 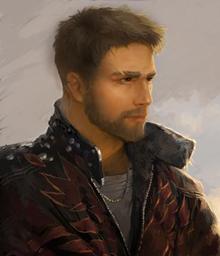