A small, non-intimidating child, dressed in toss-aways who is quite deranged Tesla Borgdova not your average thirteen year old girl. She is a tinker, an artist, a tiny little ‘know-it-all’. Some people would say it is her age, but she truly sees what other cannot. She sees patterns in all things. Coding is everywhere. Mechanics are what make everything else function. She retains the things she has seen as if there is an equation to solve later in time. She likes to solve problems and exercise her mind. She is never what you expect upon looking at her.
Tesla was put up for adoption upon birth. She was adopted out and returned several times. New parents of Tesla became unnerved around her. She is known to stare, though her eyes dodge back and forth like reading, and make people feel uncomfortable. When she turned seven, the new family that adopted her, adopted her for her special needs and sent her to special schooling where they thought her to her physical tourettes. Tesla continued school under the assumption of the tourettes diagnosis and started developing worse habits. She started mouthing off numbers and letters, writing binary codes on her walls, and talking about reading people. The family then sent her to an mental health hospital to monitor her and help her overcome these worsening effects.
While in the hospital, Tesla realized how off-putting her personality was. She learned the suppress the need to read patterns and tell people about them. She learned how to conform to society’s ‘norms’ and therefore was allowed to leave the hospital. Once out, she continued school and realized that she could focus her energy on books, mechanics and other puzzles without making people feel uncomfortable. She became known as a ‘smart cookie’ and a ‘genius’. She felt too smart for her family and felt the burden she put upon them and, therefore, left. Forever wander and dodging police and city social services. She has continued to wander from town to city and vise versa, discovering new problems to solve and new patterns to read. 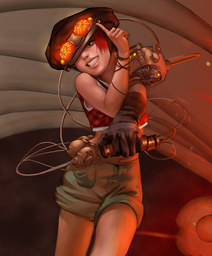