The Old Man on the Throne of Screams

Defeated in a realm known as The Wasteland of Dreams, the First Acolyte aka Rip Van Winkle, was killed by Danica “Dani” Fall. The knife that was used to exact the killing blow was a special ritualistic one gifted to her and as such, the soul of Winkle was offered as a sacrifice to a demon. The demon arrived to collect it’s prize, consuming the soul and returning to it’s hell. Upon his death, the body of Rip Van Winkle left behind a book, also collected by Dani, titled Knowledge and Ways of the Dreamscapes.

Rip Van Winkle is a myth corrupted. His story is one of a man who slept an impossible sleep but it is what he did during that slumber that both made him great, and also led to his doom. His years wandering the dream world eventually led him to one of it’s darkest secrets. The prison of the First Nightmare. Born of Creation and sealed away from subconscious minds, the First Nightmare is pure fear brought to life. Terror given substance. It’s mere presence can drive one mad. Such was the fate of Rip Van Winkle. The first time he found the prison, he came close to it’s captive. Enough to drive fear through him and sending his mind back into his resting body. He awoke with no knowledge of his adventures or of the horror he had fled.
But even that brief moment was enough to lay the smallest seed of madness in poor Winkle’s mind. The rest of the legend tells of his return to his village, of the changes wrought by time. It is said he was welcome back by his family. However, finding yourself a stranger in your own world is troubling enough, but it proved to also be the best environment for that small seed of madness to grow and flourish. Rip began feeling increasingly unwanted by those around him. He had become a burden to them in his mind and they clearly wanted him gone. The ideas of loneliness and rejection festered for months eventually turning into anger, then rage. The last night he lay to sleep his mind was consumed with raw fury at what the village had done to him, how they scorned him. He loathed them all and if he could he would bring a terrible revenge down on them all. Not just them, but on every village.
On everyone everywhere.
That night as he dreamed he found he remembered it all. All the adventures, all the knowledge, and yes, even where the prison was that held inside it that horrible fear. That suddenly delicious fear.
It took far less time to find the prison again. He had his notes again to guide him. Ideas and thoughts given a sort of physical form and bound together with the stuff of dreams. The second time he stood in the cage of the First Nightmare, he revelled in its power. It’s calling to be set free answered his own cry for revenge. Together they would make the world pay.
Rip Van Winkle died that day. His flesh was left to rot in it’s bed, while his mind and soul had started to blacken and with the changes came his new title, the First Acolyte of the Nightmare God.

The Old Man on the Throne of Screams 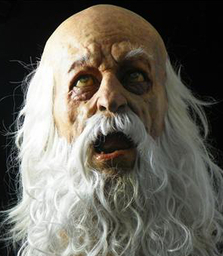